We’re excited to announce two special days in Vicenza in May and June 2020: each begins with an Etching and Printing Workshop at Historic Busato Printing Works, followed by the discovery of the Teatro Olimpico and The Villa Capra.

This one day all-inclusive tour begins with a morning workshop by master printer Giancarlo Busato in his historic Vicenza printing shop.

In the afternoon, after a light lunch, we visit the Palladian Teatro Olimpico under the guidance of historian and accredited tour guide, Monica Facchini. Then onto the world renowned Villa Capra (La Rotonda), considered Palladio’s masterpiece and the most influential building of European and American neo-classical architecture. We leave the villa to return to the hotel via a winding cobblestoned path that opens out to reveal an expansive view of Vicenza with the Dolomites in the distance – another great sketching opportunity. The package includes dinner, cocktails and an extra night’s accommodation in Vicenza at Hotel Campo Marzio with Sunday morning breakfast.

To book the tour and workshop go to our Tours page.

Established in 1946 by Ottorino Busato this highly regarded family printing works, now run by the 3rd generation Giancarlo, has attracted renowned artists from all over Italy.

After visiting the printing studio in May 2019, Liz Steel has been given the rare opportunity to bring her students for a workshop by the award-winning master printer, Giancarlo Busato.

The morning begins with an introduction to the boutique printing works and a brief description of the processes we will explore using examples from established artists.

Each student will then create a sketch to be transferred onto the printing plate, using one of their works produced during the week for inspiration. The focus, under Giancarlo’s and Liz’s guidance, will be to produce a relatively simple sketch that lends itself to the eventual print medium. The next step which will include a demonstration, will be to transfer the sketch onto a Perspex plate using an engraving tool. Once the plates are completed Giancarlo will produce some prints onto watercolour paper using the star wheel press. You can have a go at adding a watercolour wash later if you want! 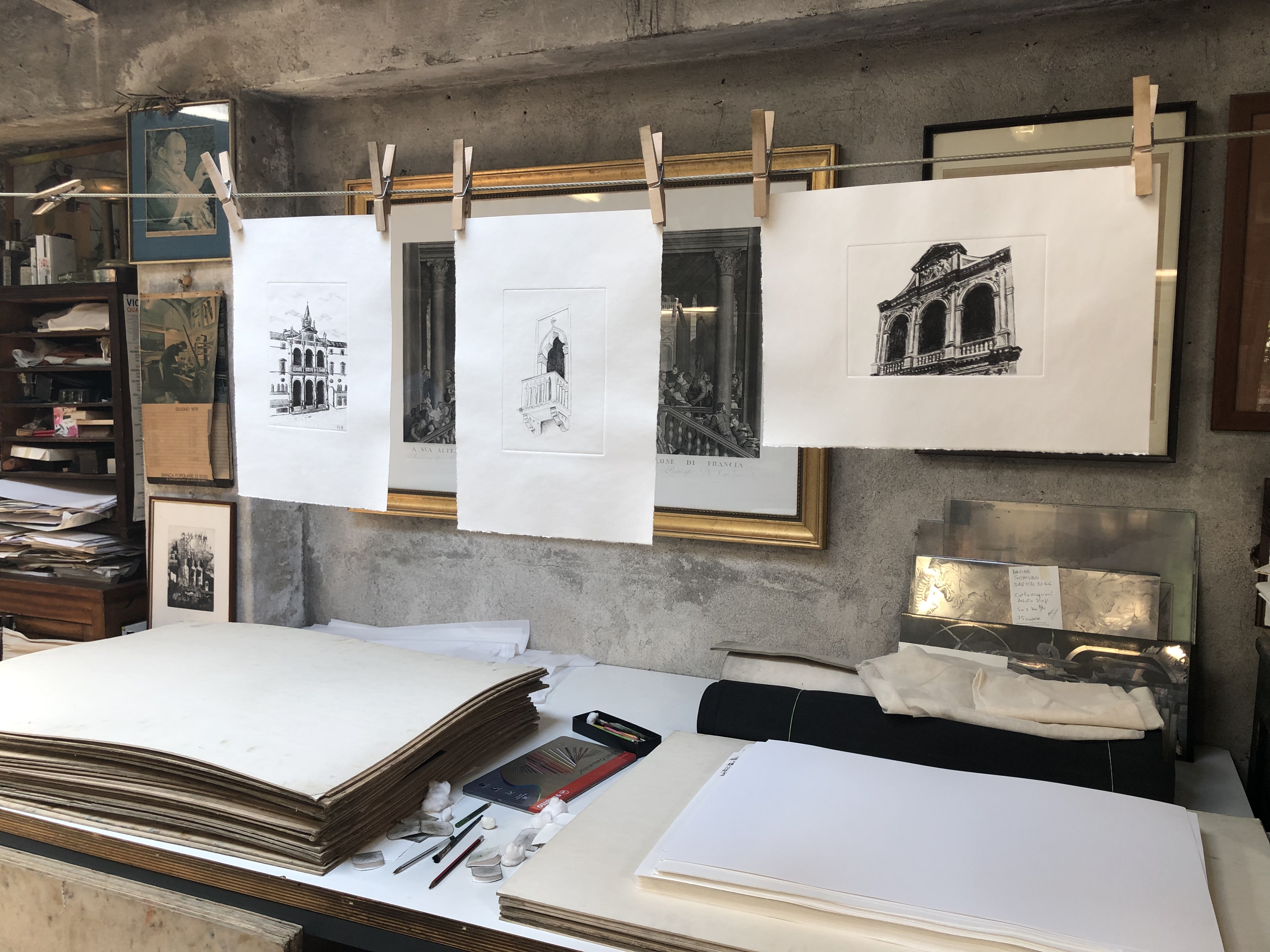 While the prints are being produced we will have the chance to visit the extensive art collection in the boutique gallery on the first floor. We end the workshop at noon with a toast to each others achievements.

(The prints will hang in the workshop to dry through the afternoon and will be delivered to the hotel in the evening). http://www.stamperiadartebusato.it/

In the afternoon, under the guidance of historian and accredited tour guide Monica Facchini, we visit two highly significant works – not only of Palladio but also of the late Renaissance.

We first visit the Teatro Olimpico, designed by Andrea Palladio in 1579 and completed after his death by Vincenzo Scamozzi. The classical splendour of its proscenium invites us to imagine the great ancient Greek tragedies being performed here from the 16th Century through to the present day. This is a great chance to test your newly acquired classical architecture sketching skills during Monica’s tour.

Later we take the bus into the surrounding hills to visit the Villa Almerico Capra Valmarana, better known as Villa Capra or La Rotonda. This villa was originally designed by Palladio as a summer retreat for the retired Vicentino cleric Paolo Almerico, who, like Palladio, didn’t live to see its completion. Arguably one of the most influential works of architecture in history, this villa was inspired by the Pantheon in Rome and is lavishly frescoed by 16th-century Venetian artists Maganza and Canera. After Monica’s guided tour of the villa, we will have the opportunity to relax in the tranquillity of the gardens and capture the afternoon light on the building facade in a quick, paint first sketch as will be demonstrated by Liz. 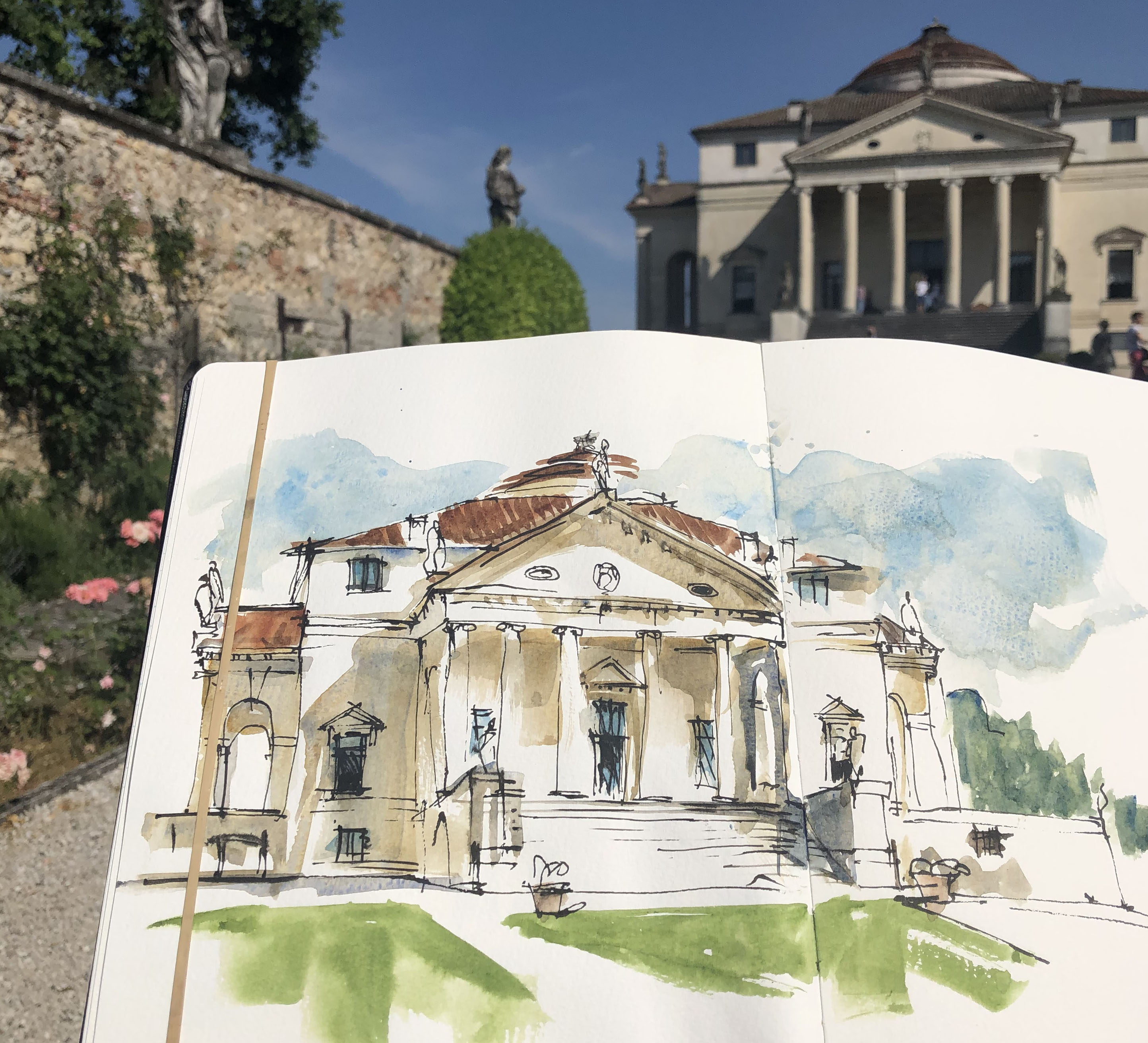 The winding, shaded cobblestoned path that takes us back to the centre of Vicenza opens out at Monte Berico to reveal stunning vistas of the city and the Dolomites beyond. Here we can stop for a moment and enjoy the view and, of course, add a final panoramic sketch to our sketchbook. 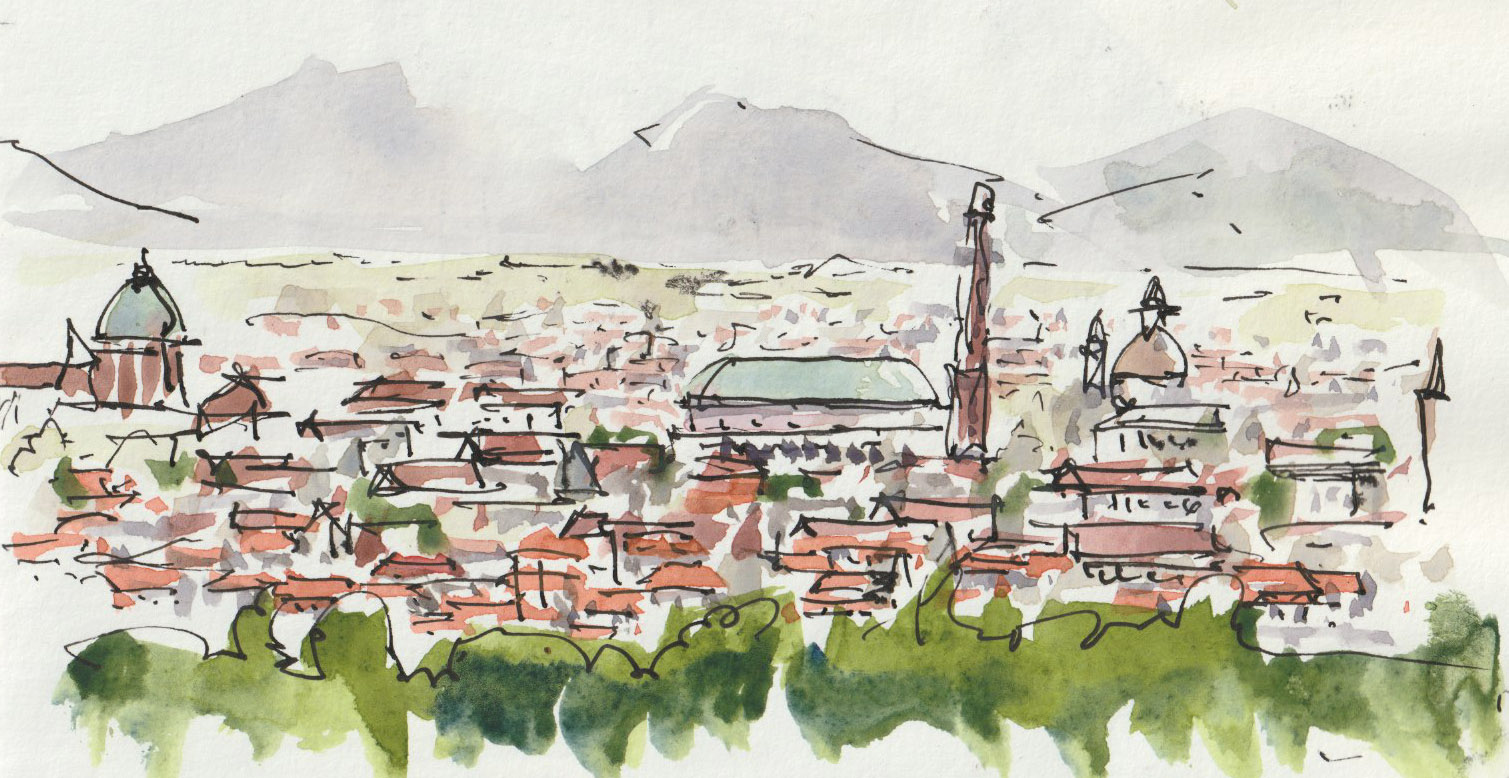 A fitting end to a busy day has us enjoying a fine meal together but not before some drinks at the hotel while we reveal the prints and sketches we’ve produced in the course of the day.